The fall semester ended on Saturday, December 10, but it wasn't vacation time yet.  I was enrolled to take Human Physiology during the winter intersession, and the first day of class was Monday, December 12, so it was right back to school for me when the weekend was over!  The class was rewarding, and I learned a lot, but it was challenging in a number of ways:
As far as Christmas decorations go, we didn't have much, but we were still able to fit some Christmas cheer into our apartment thanks to my wonderful mother-in-law Narayne!  As I mentioned in the last post, she gave us a pre-Christmas package when we were at her place for Thanksgiving.  She gave us the Charlie Brown tree, a tree skirt, a couple ornaments, a serving tray, and a snowman pillow (because Michael loves snowmen, so I'm led to believe). 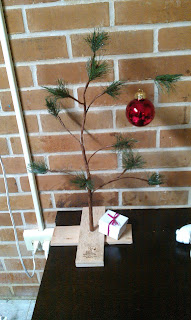 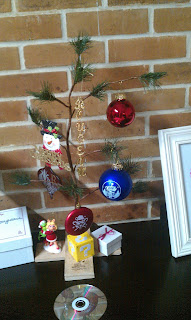 Our Charlie Brown tree, before and after ornaments!  It brightened up our home.  I have a couple of Raising  Cane's ornaments, a snowman that says "Merry Christmas," a fancy red one with an "R" on it, and Miss Piggy with her Kermit!  (That was a gift to me a few years ago from...my mom? My aunt? Can't remember...but yeah, I so loved Miss Piggy as a kid.) 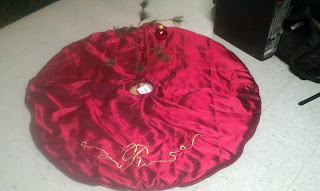 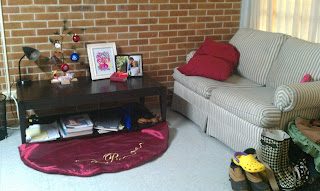 I ended up finding a way to use our tree skirt, though.  :)
(Most of the shoes/clothes on the right were about to go to Goodwill. Merry Christmas, Goodwill-ers!) 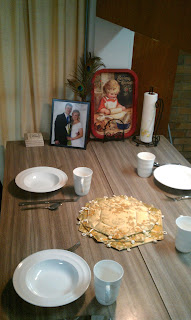 That's a serving tray propped up at the end of the counter that says "Season's Greetings."  I didn't get to serve anything on it, but I think next year I want to make good use of it with plenty of holiday baking.


Once class was done on December 23 (though for some reason the final exam was after New Year's), we went to Houston to enjoy the holidays with my Egan family.  We were all there (except for Nick, who was still on his mission...he missed us by 2 weeks!) We hadn't seen Emily, Jeff, and their daughter Evangeline I think since Mike & I got married months before, so it was really great to get to hang out with them.  It was an awesome week & a half full of singing, cooking delicious things, watching movies, swimming in my parents' pool, playing Zelda...there was never a dull moment, especially with two cute cute nieces running around!  Maybe every aunt thinks their nieces are the best/cutest/more adorable/prettiest nieces in the world, but I really DO have the best nieces in the world.  ;)  My favorite memories from the trip were when we had out fun family tradition where, before bed, we light candles and each open a present each night for a few nights before Christmas, and we sing "Happy Birthday" to Jesus (in the most reverent way we can) and blow out the candles.  It's kind of silly, but it's something we've done as long as I can remember and I love it.  :)  I love my family SO much. 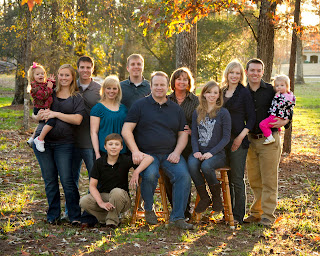 Jane took a family pic of us to celebrate the occasion.  What a talented "photographist." :)

My sisters Jane and Emily also keep blogs and posted about our little reunion.  They have TONS of pictures and go more into detail about the week, so definitely check those posts.

Mike and I stayed for New Year's, and then it was back to Baton Rouge.  I took my final for my intersession and got back to working at Cane's, and Michael went back to working full-time at his video game testing job at EA.  It was only one week until Nick was coming home and two weeks until school started again...
Posted by Natalie Rougeau at 1:32 AM